Lawmakers stood with southern Queens emergency responders this week to call on the city to take whatever steps necessary to beef up its ability to respond when residents are most vulnerable.

State Assemblyman Phil Goldfeder (D-Rockaway Park) said the city Fire Department would benefit from some pre-emptive measures like GPS technology to help volunteers and other emergency responders deliver the care southern Queens deserves. He joined with members of the West Hamilton Beach Volunteer Fire Department and several others to demand the Transportation Department hits the gas. 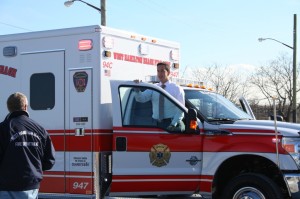 “Response times are critical in an emergency and due to southern Queens and Rockaway’s geographical isolation, time is not always on our side,” Goldfeder said. “This GPS technology, already in use on Long Island and across the country, will provide unique and precise control that will help responders reach their destinations quickly and reduce crash rates by nearly 70 percent.”

Goldfeder said one of the biggest obstacles before emergency responders came in the form of car accidents, second only to heart attacks. These pre-emptive measures, the lawmaker argued, would reduce the potential of accidents involving emergency response vehicles throughout the city.

Jonah Cohen, chief of the West Hamilton Beach Volunteer Fire Department and Ambulance, said technology like that would be a gem to his team, which has been relied on heavily in southern Queens in times of crisis.

“The GPS tracking will greatly enhance our response time getting patients to hospitals. Reducing our travel time to the hospital can in some instances save a life,” he said. “Whenever you can save time getting to an injured person and then getting that person to a hospital, you greatly increase their chances for survival.”

Dennis Graham, who helped start the Center for the Study of Healthcare Delivery, said his group was established to advocate for delivering quality care to residents in need as efficiently as possible. He stood alongside emergency responders last week with Goldfeder to throw his support behind him.

“We are committed to supporting the use of a traffic preemption system for the Rockaways and southern Queens to ensure residents and visitors receive rapid emergency care,” he said. “We believe that where you live should not determine whether you live.”

The GPS technology, Goldfeder said, would kick into effect when responders answer a 911 call. The system located inside their vehicles would calculate speed, direction, longitude and latitude information. The measure would have traffic lights programmed with an approach map in order to detect when emergency vehicles are approaching and therefore light up green for them as they approach, he said.

Once the emergency response vehicle is out of range, the controllers inside the lights would return back to normal flows of traffic and could be remotely tracked at any given time, he said.

“Our families in Rockaway are severely lacking when it comes to emergency care, and this inexpensive GPS technology can help first responders in an emergency make it to their destinations quickly and safely,” Goldfeder said. “I strongly urge the Department of Transportation and FDNY to take action and install this new technology immediately to help our families.”