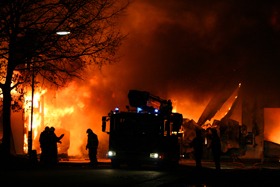 When your life hangs in the balance, emergency responders with the Cape Coral Fire Department (CCFD) say they’re not getting to you as quickly as they could be.

The goal is to arrive on scene within 5 minutes, but Cape Coral firefighters are only meeting that goal less than 29 percent of the time.

“We would love to decrease response times as much as possible, as soon as possible,” said Div. Chief Mike Russell with CCFD. “Cape Coral’s unique in its structure because of all the canals, and a major problem is roads are congested, especially during season, which backs us up at intersections and we get long delays at red lights.”

The systems can detect approaching emergency vehicles, “so if they’re approaching an intersection and the light is red, it would preempt it green so they would allow the traffic to flow through the intersection more smoothly, decreasing response times to emergencies,” Russell explained.

Currently, the South Trail and Iona McGregor fire districts are the only agencies in Lee County with the systems in place, adding them to 83 intersections several years ago.

Cape Coral currently has money set aside in the 2019 budget for the systems. The fire department also plans to apply for grants that could get the systems installed sooner.

We are happy to be part of Cape Coral, Fl improving response times.