Fire department officials said the technology, funded by a $125,000 grant from state Assemblywoman Michelle Schimel (D-Great Neck) and installed on all of Manhasset-Lakeville’s fire trucks and ambulances, should help cut down on response time and accidents involving emergency vehicles.

“Over my tenure, I have witnessed some horrific accidents, many of which occur at intersections, the most dangerous part of the roadway for emergency responders,” Manhasset-Lakeville captain Joel Rosenthal said. “Not only has the pre-empter system saved time when people are calling for help, the time when precious seconds count most, but it has made the roadways safer for everyone.” 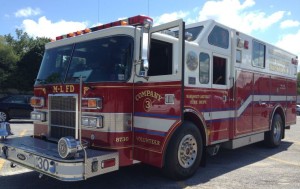 The GPS technology installed on all of Manhasset-Lakeville’s fire trucks and ambulances should help reduce response time and accidents involving emergency vehicles.

When activated, the GPS preemption systems broadcast an emergency vehicle’s location as it approaches an intersection and changes the signal on nearby stoplights so it can pass through without disrupting the flow of traffic or confusing motorists.

“When firefighters and emergency medical technicians respond to a call, it is imperative that they arrive at their destination quickly and in the safest way possible,” Schimel said. “This preemption technology will enhance public and firefighter safety and improve traffic flow for responding emergency vehicles and at busy intersections.”

Manhasset-Lakeville officials said the department responded to more than 2,600 emergency incidents in 2013 requiring the assistance of crews and equipment from several stations.

Car accidents involving responding emergency vehicles accounts for the second-highest cause of death among firefighters in the United States, according to the United States Fire Administration.

“The officers and members are extremely grateful to Assemblywoman Michelle Schimel, who is always there to help out the fire service,” said Manhasset-Lakeville Chief Michael Farrone. “The grant she obtained for our traffic signal pre-emptor will make it easier for the Manhasset-Lakeville Fire Department to respond to emergency calls. In any emergency, time is of the essence.”

With the new technology, Farrone said crash rates could be reduced by up to 70 percent while increasing response time by up to 25 percent.

According to the state Department of Transportation, Northern Boulevard – located near four of Manhasset-Lakeville’s five firehouses – averages a volume of 30,000 vehicles per day.

“It is my hope that other fire departments and ambulance units in the area will utilize this public safety tool by outfitting their emergency vehicles with pre-emptor technology,” Schimel said.

Manhasset-Lakeville officials said they would like to equip 11 other intersections with the technology in the coming months.

Farrone said officials are working toward state legislation that would equip all traffic signals that have enforcement cameras with the preemption system.