It’s no easy task getting across San Francisco during rush hour, but some new technology being installed on Muni buses is now helping thousands of commuters.

SFMTA began utilizing transit signal priority on the 14 Mission line in late March. According to John Haley, Director of Transit for the agency, it had sped up commute times by 10 percent.

“We’re seeing significant savings, meaning on average 5 to 7 minutes on a trip that could be 50 to 55 minutes,” said Haley. 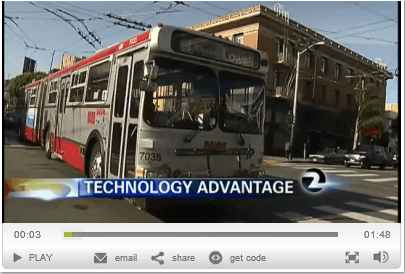 SFMTA transit signal priority has sped up commute times by 10%.

“They do move a lot faster than they used to,” said Horton, who lives in San Francisco.

“We’re looking to improve travel time on lines that impact the most riders,” said Haley.

Installation is in progress for the 8X Bayshore line and the N Judah streetcar line is slated to be fully installed by this fall. Approximately half the intersections on those lines will have transit signal priority.

In total, about 125,000 riders should see commute times reduced between the Mission, Bayshore and N-Judah lines.

“I take the N-Judah downtown every day for work, and it’s really stop and go until it gets to the tunnel. So I think additional time saving would be nice,” said Alli Rosen, who lives and works in San Francisco.

“I don’t know if it will help buses and trains be on time, but maybe it will and that will also be helpful,” said San Francisco resident Kara Leslie.

Up next, a spokesperson for SFMTA said the 6 Parnassus and 1 California are also in the pipeline for transit signal priority if funding comes through.