Determine how to identify when and where slowdowns occur along a given route.

Developing a data-driven approach to preemption

U.S. Department of Transportation studies1 point to a 25 percent improvement in emergency response times when using signal preemption. More significant however, is the 70 percent reduction in intersection crash rates for emergency vehicles.

These improvements are critical to public safety — every second counts during an emergency response. Knowing where you can improve safety and save the most time is crucial to optimizing your operations even further.

In late 2016, engineers from Global Traffic Technologies began looking at GPS location data logged by Opticom vehicle equipment on a second-by-second basis to see if they could pinpoint where slowdowns were causing delays to emergency response. The team expected to be able to show when and where delays occurred and use that data to build a case for traffic signal preemption improvements that help to reduce the variability of travel times along a designated route.

To test their theory, a van driven by a GTT test engineer who traveled the length of Radio Drive in Woodbury, Minn. between 3rd Street North and Lake Road. The test consisted of two southbound and two northbound trips. The route included 12 signalized intersections in each direction.

The van was equipped with an Opticom GPS-enabled 2100 vehicle unit. Preemption or priority was not requested or granted during this test. The Opticom vehicle equipment was only used for GPS data collection.

During the test runs, GPS breadcrumbs were dropped and recorded to the Opticom vehicle unit and later uploaded to a database. The average speed was calculated to be 26.21 miles per hour. Data points were plotted to show a speed vs. time chart with corresponding intersections along the route (Figure 1).

In the case of an emergency response, you can assume that lights and sirens would result in faster travel times.

However, each intersection would still pose significant safety risks, particularly if traveling against a red light. According to the U.S. Fire Administration’s Emergency Vehicle Safety Initiative handbook2, intersections are “the most common place where vehicles of all emergency disciplines are involved in a collision with another vehicle.”

Every point that reaches zero along the X-axis in Figure 1 represents a stop at a red light intersection. These areas pose significant safety risks where cross traffic could collide with an emergency vehicle, even when using lights and sirens. 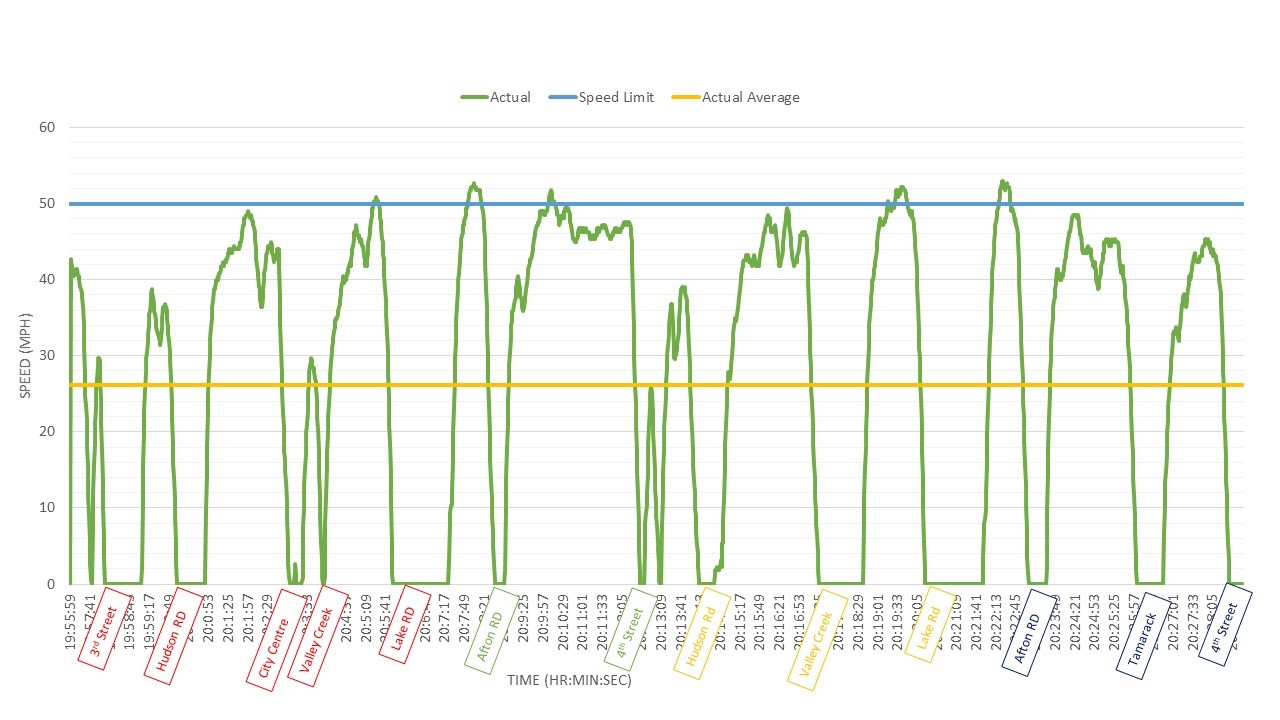 In addition to safety concerns, significant variability in travel time could be found within the four runs. Figure 2 shows the travel time for each northbound and southbound trip. Northbound Run 1 was completed at approximately the posted speed limit, while Southbound Run 1 took nearly twice as long. It should be noted that the northbound route takes traffic toward the interstate highway, whereas the southbound route flows into retail, residential and commercial areas. 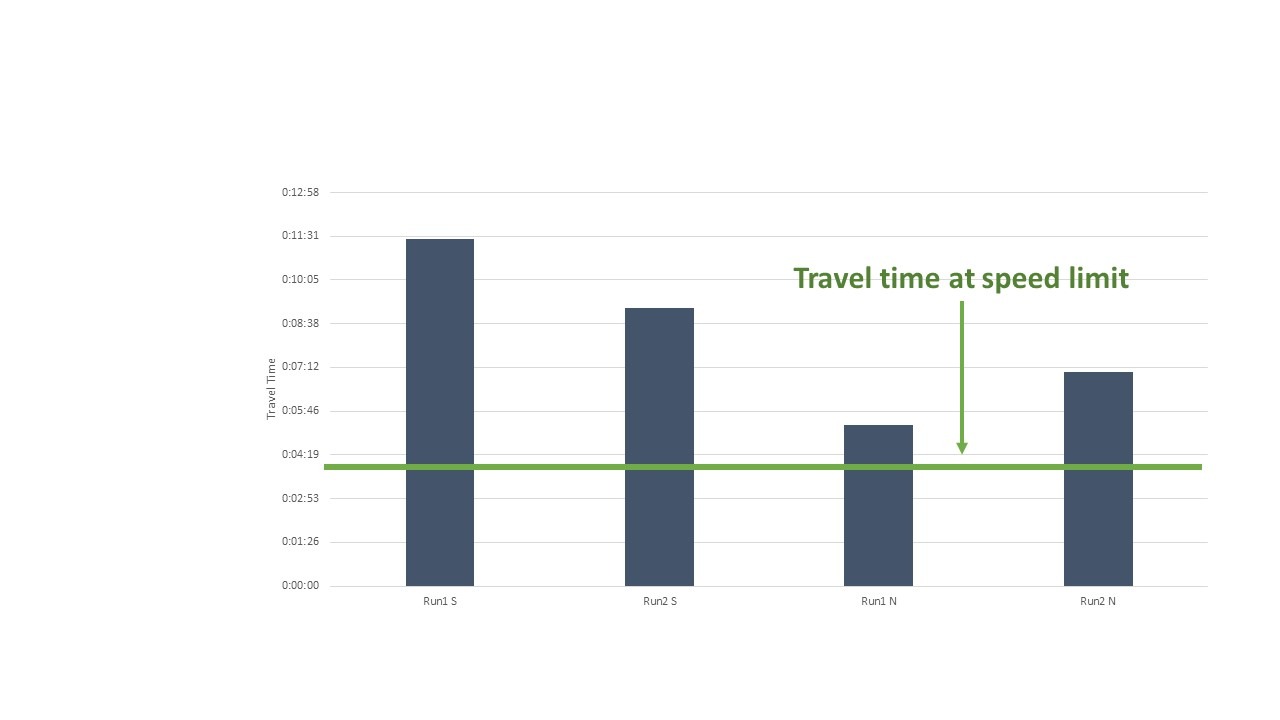 Reducing variability for public safety vehicles can result in more reliable response times, which can lead to better emergency response outcomes.
Take as an aggregate, the four runs along Radio Drive were completed in 32:03 at an average speed of 26.21 miles per hour. The average posted speed limit along Radio Drive is 50 miles per hour. With no slowdowns, the four runs could be completed in 16:48.

Figure 3 shows the travel time savings that could be realized by increasing the vehicle speed along the route. 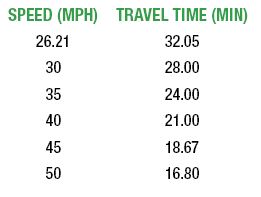 Figure 3: Travel times at various speeds along the route.

For public safety vehicles, a slow down of even a few seconds can be the different between containing a fire to a room of origin or saving someone’s life.

In addition to the time savings, the ability to reduce acceleration and deceleration helps to reduce wear and tear and maintenance issues. Vehicles are also more fuel efficient when traveling at a constant pace.

Finally, the potential to reduce crash rates at intersections reduces the risk of injuries and fatalities of first responders and the general public during an emergency response.

“Knowing where you can improve safety and save the most time is crucial to optimizing your operations even further.”

Preemption “Part of the Package” for Grand Prairie, TX Police

Industry experts at your service.

Join GTT at a future event.

Locate a GTT Regional Manager in your area.

Get in touch with an industry expert.