The Traffic Tech Group’s most recent ITS projects in Qatar, the Duhail Over-height Vehicle Detection  System (OVDS) and the Doha Emergency Vehicle Preemption System (EVPS), collectively won the Most Innovative ITS Implementation Award at the ITS and Road Safety Awards 2014.

“We are truly delighted to have won the Most Innovative ITS award as this represents our commitment to deliver the most advanced ITS technologies in Qatar and in the region”, says Husam Musharbash, Traffic Tech’s president & CEO. “We dedicate this award and extend our gratitude to the Public Works Authority, Ashghal for their continued trust and confidence in Traffic Tech and for making us a part of Qatar’s ITS infrastructure developments”, he adds. 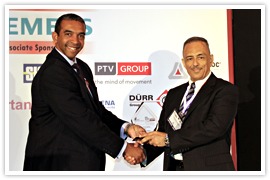 “Traffic Tech Gulf is very pleased with the performance of Opticom™ in the Doha Emergency Vehicle Preemption System. We look forward to many more successful implementations in the Gulf region and a continued strong partnership with GTT. ” Mr. Husam Musharbash, Traffic Tech Gulf, President and CEO

The contracts for both the Duhail OVDS and the Doha EVPS projects were awarded to Traffic Tech in 2013. Both were fast tracked projects completed in record time and both were fully operational in early 2014.

The Duhail OVDS incorporates a wide range of ITS technologies including over-height vehicle detection system, variable message signs, CCTV surveillance, control room equipment, and integration to Doha’s SCATS urban traffic control system. The system was installed on three approaches of the Duhail Interchange to limit the passage of over-height trucks under the bridge of the interchange.

On the other hand the Doha EVPS project, in its initial phase, includes the installation of preemption equipment at 25 intersections and 5 roundabouts throughout Doha, and preemption transmitters fitted to a total of 30 emergency vehicles. The second phase of the project is in the process of being awarded and would involve a much larger scope, including 50 additional intersections, to cover more critical areas and more emergency vehicles in the country. 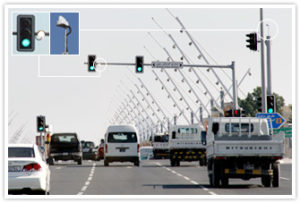