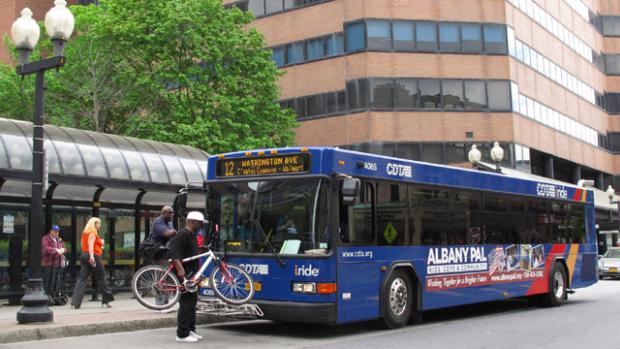 City of Albany adds Opticom priority control to 20 vehicles and 60 intersections on another corridor of its Bus Rapid Transit system.

CDTA runs several bus routes throughout the city, including from the airport and to the city’s Amtrak train depot. For this project, CDTA added transit signal priority (TSP) to 20 vehicles and 60 intersections along the River Corridor of its BRT. The “BusPlus Blue Line” operates on a 16-mile corridor that runs along the Hudson River and connects the cities of Albany, Cohoes, Menands, Troy, Waterford and Watervliet. As the third busiest transit corridor in the region, it transports more than three million passengers annually.

The Opticom TSP system allows public transit agencies to extend or truncate green cycle times at traffic signals, for better schedule adherence, thus enabling a more reliable trip for passengers. In turn, transit vehicles are on the road less, which can significantly reduce fuel costs and/or enable expanded service with the same resources.

A third BRT project in Albany is already in the works, which will add another 20 vehicles and 30 intersections on the Western Washington Corridor, starting in late 2022. The “BusPlus Purple Line” will provide direct connections to downtown Albany by operating on an eight-mile corridor that runs through the city along Washington and Western Avenues, including the region’s largest shopping center (Crossgates Mall), multiple University at Albany campuses, the Harriman Office Campus and The College of Saint Rose.

Located about 150 miles north of New York City, Albany is the capital city of New York State and the place where Santa Claus and the feast of St. Nicholas was first celebrated. America’s first passenger railroad ran from the intersection of Western and Madison Avenues in Albany to downtown Schenectady.

GTT provides a clear path to smarter and safer mobility for communities worldwide. GTT’s Opticom intelligent transportation solutions help to increase safety, minimize traffic congestion and reduce greenhouse gas emissions, while maximizing resource efficiency and performance. Thousands of emergency, transit and traffic agencies have trusted the innovative, comprehensive Opticom traffic solutions for more than 50 years. Headquartered in St. Paul, Minnesota, GTT is the market leader in traffic management systems, having an installed base of more than 180,000 connected devices in over 3,100 municipalities worldwide, including 41 of the 50 largest U.S. cities. To learn more, visit www.gtt.com.

Back to Press Releases